The Weeping Angel: A Memento of Nellie Spindler

Published by Administrator on 2nd March 2018

In the Spring of 1917, a young staff nurse called Nellie Spindler paid a visit to one of the grandest of Europe’s gothic monuments: the medieval cathedral at Amiens.  One of the youngest members of the Queen Alexandra’s Imperial Military Nursing Service (QAIMNS), Nellie had been posted to the Western Front the previous November.  Eager for action and keen to play her part in what people were calling the “Great War for Civilization”, she had travelled from a QAIMNS military base hospital at Lichfield in Staffordshire, first to a general hospital in the French harbour town of Le Havre, and then ‘up the line’ to a stationary hospital much closer to the Western Front, at Abbeville.

As she walked in under the huge gothic portal of Amiens cathedral, Nellie must have felt a tremendous sense of achievement – albeit one tempered by sadness at the suffering she had observed in military hospitals behind the Western Front.  Born in Wakefield on 10th August, 1891, the daughter of a police sergeant, Nellie was the oldest of four children.  She had grown up at 104, Stanley Road, and attended the Eastmoor Council School; but she was a little unusual for her time.  From an early age, she had decided that what was regarded as the ‘normal’ life for a woman – marriage, children, and a quiet safe existence at home – was not for her.  Nellie wanted a career that would give her a sense of purpose, the opportunity to do something worthwhile, and the chance of financial independence.  She had decided to become a nurse.  Convincing her father had been quite a battle.  At first he had forbidden her even to mention the idea.  But Nellie was determined; in 1910, at the age of 21, she obtained work at the Wakefield Fever Hospital.  She “lived-in” and, on the hospital’s Census return, was described as a “domestic servant”.  But the job-title was deceptive; it was given to many young women who were learning the art of caring in lower-status hospitals.  They were paying their way by performing cooking and cleaning duties all of which were seen as part of a wider apprenticeship for a future career in nursing.  Following a short spell at Barnes Nursing Home in Scarborough, Nellie had entered the Leeds Township Infirmary as a ‘nurse-probationer’ still learning her craft through an apprenticeship “on-the-job” training, but now also attending lectures on anatomy physiology and pathology and learning the more technical aspects of nursing practice.  In 1915 she joined the military nursing service as a QAIMNS Reserve nurse, and was posted to the Whittington Military Hospital in Lichfield, to care for wounded men being brought back from the front lines.

The QAIMNS was Britain’s official army nursing service.  At the outbreak of war in 1914, it had only 297 members, and had to rely on a gradually increasing supply of so-called ‘Reserves’ – nurses who had signed a register confirming that they were prepared to be ready for active service at 24-hours’ notice in the event of a war.  The leaders of both medical and nursing services had decided that the QAIMNS and its Reserve would staff military hospitals overseas, whilst the Territorial Force Nursing Service, founded in 1908, would staff military general hospitals on the home front.  By the Spring of 1915, it was becoming clear that there was an acute shortage of nurses on the Western Front, and senior medical and nursing personnel decided – albeit reluctantly – to post both Territorial Force nurses and untrained volunteer-nurses (the so-called ‘VADs’) overseas.  The nursing services in France therefore formed a highly complex system composed of the QAIMNS (and its Reserve), nurses of the Territorial Force Nursing Service, VADs and fully-qualified nurses from the British Dominions of Australia, New Zealand, Canada and South Africa.  As Nellie walked through the streets of Amiens to the cathedral that day in 1917, she would have been rubbing shoulders with nurses of many types and from many nations, as well as with other medical personnel and soldiers on leave.

One of the most celebrated tourist attractions at Amiens Cathedral was the so-called “Weeping Angel”.  It was carved in the late 1620s, by Nicolas Blasset, to adorn the funerary mausoleum of Canon Guilian Lucas.  There was so much to see at the cathedral that the weeping angel might have been easy to miss – located, as it was, in the ambulatory behind the high altar.  But by the Spring of 1917 it had become so famous among British soldiers that anyone visiting from a British base automatically sought it out.  A year earlier, in the build-up to the Battle of the Somme, many soldiers had sent postcards of the angel home to their families – postcards that were soon to become cherished mementoes of young men who never returned.

A small “cherub”, or “putti”, the angel sits in an attitude of utter dejection, his right elbow resting on a skull, to denote death – his hand cradling his downcast head.  His left hand rests heavily on an hourglass, symbolising the brevity of life.  This famous ‘memento mori’ was irresistible to young men heading “up the line” to the battlefields; and, on the eve of her posting to a front-line casualty clearing station, it also drew Nellie Spindler.  In her brief military career, she had already seen so much death and destruction that the weeping angel must have seemed an apt symbol of the needless devastation into which that “Great War for Civilization” had descended.  Before leaving Amiens she bought two replicas of the angel in the shape of tiny, round, silver pendants.

Towards the end of July, Nellie was assigned to Number 44 British Casualty Clearing Station (CCS) a small field hospital that had already seen almost three years of active service.  Its newly-appointed matron, Minnie Wood, a full member of the QAIMNS, had, like Nellie, grown up in Wakefield, and it is tempting to think that, in spite of their differences in rank, Minnie had probably acted as a friend and mentor to Nellie.  Number 44 CCS, along with Number 32 and Number 3 Australian, were part of a new experiment for the military medical services.  The idea was to bring specialist CCSs very close to the front lines, in order to treat the terrible wounds created by industrial weaponry more quickly.  Senior surgeons realised that men were dying of wound infections caused by the anaerobic bacteria that inhabited the mud of Flanders and Northern France.  Only by bringing those men into operating theatres within hours of their wounding, and removing all infected debris from their injuries could they improve the survival rates.  They decided to bring whole units, consisting of doctors, military orderlies and nurses to within a few miles of the reserve trenches.  So Numbers 44 and 32 British, and Number 3 Australian became an enormous “Advanced Abdominal Centre” (AAC), located in Brandhoek, just three miles behind the lines.  Ambulance drivers were instructed to bring only the most dangerous wounds of the war to the AAC: those affecting abdomens, chests and femurs (a fractured femur or thigh bone could be as rapidly fatal as an abdominal or chest wound, because it punctured the skin, damaged blood vessels and soft tissues and became infected).

Just before departing for Brandhoek Nellie had sent one of her ‘weeping angel’ pendants to her mother in Wakefield.  A few weeks later, in mid-August she wrote to her sister, Lillie asking if she would like one too.  By this time, Nellie, along with her fellow-nurses at Brandhoek, had been enduring weeks of bombardment.  Their hospital was so close to the front lines – beside a strategically-important railhead, and close to an Allied artillery emplacement – that they were subjected to frequent bursts of long-range artillery and to aerial bombardment from the newly-designed German ‘Gotha’ aircraft each of which could carry hundreds of kilogrammes of explosives.  The nurses knew they were in great danger.  They were also heavily overworked; the wounded would come into their hospital in ‘rushes’, several hundred at a time.  Yet they managed to find time to write the letters home that formed the fragile links to their families.  Nellie must have received a reply from Lillie to the effect that she would indeed like a pendant, and the small silver disc was duly despatched.  By the time it reached home, Nellie’s family had already received a telegram from the war office to say that she was dead.  On the morning of 21st August, she had returned to her tent after a long night-duty, and had lain down on her stretcher-bed to sleep.  About 11am a shell had exploded close by and a piece of shell casing had ripped through the canvas of her tent, and then through her body from back to front, just below the level of her heart.  She had died in the arms of her matron, Minnie Wood.

The arrival of the second ‘weeping angel’ at 104 Stanley Road, two days after a telegram announcing Nellie’s death, must have seemed like a message from beyond the grave.  It was followed, days later, by a letter from Minnie Wood, comforting the family with the news that Nellie had suffered no pain.  “I don’t know what to say to you”, wrote Minnie, “for I cannot express my feelings in writing and no words of mine can soften the blow”.

The two “weeping angel” pendants are now the treasured possessions of Nellie Spindler’s descendants.  The one that was sent to Lillie just before Nellie died has been made into a pendant which is often worn by Lillie’s granddaughter, Julia.  The other – sent to Nellie’s mother – was carefully preserved by another sister, May, who then handed it on to her own daughter Vera.  Today, Nellie Spindler’s work and sacrifice are still remembered by her family.  The pendants she sent home are a constant reminder of how much she did to save lives during the First World War – to the extent of risking – and ultimately losing –her own.

[Copyright in this text is reserved by Christine E. Hallett]

Her War by  Amanda Lynn Gwinnup I am a PhD student in my final year at the University of Huddersfield, my thesis, provisionally titled Invisible Illnesses and Hidden Disabilities due to be submitted in 2022, Read more…

‘People are curiously incredulous of a danger they cannot see’.

Sarah Rogers PhD student, University of Huddersfield Recently I read this quote written by Eva Lückes, matron of The London Hospital, 1880-1919. It seems to me, as relevant today, as when she wrote it nearly Read more… 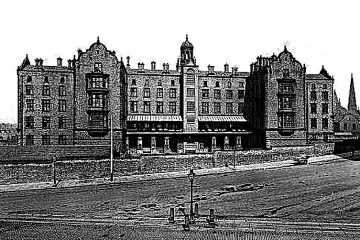 Dr Sue Hawkins, honorary researcher at Kingston University. What connects free school meals and pauper nurses? Both have been accused of promoting dependence on state aid. Last week, in the debate on provision of free Read more…